“Likewise, if the heart was to have a very weak subtle information field around it, it may not be so healthy. One would need to go to a licensed veterinarian to be sure, or in the case of a human, a recognized medical authority like a licensed medical doctor. This way both your rational mind is content, and you don’t disrupt the power struggles of the medical system,” he said with a glint in his eye.

“Here is another way of looking at it. If you were to analyze a fruit tree, and you found a high subtle information reading of a bacteria, does this mean that this tree has a bacteria in it? Since we are not physically looking through a microscope we are not able to see whether or not there is a bacteria in this tree, but we have found some very interesting correlations. It appears that when we find a low IDF reading of bacteria, that little or no physical element is found. Occasionally, it has been observed that even when there is a high reading found, physically there would be no bacteria found. We have termed these readings as Miasms, which would be described as a blueprint in which the ‘building project’ has not progressed to the physical level.

“It seems as though everything in the Universe has its own individual resonant information that it emits, as individual and readable as your fingerprint. So it would make sense that there is a bacteria present that is emitting that field. The only way to know for sure, is to take a portion of the tree and look at it under a microscope. After making this comparison you may soon learn to trust that when certain IDF readings are found, there is also a physical correlation.

“There is one person that uses his SE-5 plus to analyze the content of the precious metals that he receives for making jewelry. This is very precise measuring, but he has found that it is extremely reliable to measure the information field to know the physical metal’s content.”

I could tell he was warming to his subject, as his eyes were glowing with excitement.

He charged ahead. “The amazing part of the SE-5 plus is that it can not only detect and measure the strength of these subtle fields, but it can also send information to try and balance the IDFs as well. How is this possible? This is actually a natural phenomenon, using predictable laws and principles. “We can begin by using the metaphor of a TV broadcasting station. Most TV stations are capable of not only transmitting information, like Saturday Night Live, but also of receiving a show from a satellite or microwave tower. Our bodies seem to work in a similar fashion, but at a much higher level of efficiency. We transmit and receive information all of the time through our five senses as well as our sixth sense, all at the same time.

“How many times has it happened to you that you were doing some task like washing the dishes or cleaning up the house, thinking of someone and perhaps keeping an eye on the kids, and maybe even watching TV all at the same time?” he asked and took a deep breath. “Then the phone rings and it is the person you were just thinking of? The human system is capable of doing many things simultaneously.

“The SE-5 plus is really a fine-tuning and amplifying system to bring into conscious awareness some of the things that you may already be doing. With the help of the SE-5 plus, we are able to tune in, very precisely, to any energy emanation in the universe no matter what the distance is!

“I have a friend who was on vacation and had rented a car. He had locked the keys in the car and walked to a hotel to call a locksmith. The locksmith told my friend to wait right there and he would come and get him. By the time he drove by to pick up my friend and take him to the car, the car had vanished. The locksmith felt very bad for my friend and offered to give him a lift back to his hotel. After calling the police and getting no hope of results there, he sat and brooded over his fate for a couple of hours.

“Then he remembered that he had his SE-5 plus with him and decided to give it a go. He figured that if the car was emanating subtle information fields, perhaps he could trace it down. He got out a map of the area and using the map scanning technique, he found the location of the emanations. He called a cab and had the driver take him to the location that he had found on the map. It turned out to be a construction project of a high rise building and sure enough, the car was sitting right there in the parking lot! He called the police and they contacted the rental company for a new key. He was up and running again, but this could have gone very differently,” he said and then paused for a quick drink of water.

I looked around at the crowd and noticed that several people had caught the impact of this story. Others had a slight look of disbelief on their face. I was feeling caught in the middle, perhaps a little detached. My interest was certainly there, but I was not yet a true believer. But my back was feeling much better...

“So by now this SE-5 plus must sound to you like a combination of a Star Trek Tri-Corder and the little glowing cylinder that ‘Bones’ uses to ‘look’ inside of his patients. I must admit that sometimes it feels like Star Trek is a little outdated. The SE-5 plus can be used for even more exotic projects. It has many applications for business, agriculture, mining, and health, with many new areas being developed every day.”

Then he asked if there were any questions so far. The woman next to me seemed a bit impatient and asked, “This is very interesting, but can you tell us what all these buttons are for?” as she pointed to the instrument on the table. I didn’t mind, as my curiosity was also becoming aroused.

“OK,” he said, “let’s have a look at the instrument itself and the purpose of each of its functions.” He clicked his remote control once again and hovering in front of us was a holographic image of the SE-5 plus with little numbers and letters pointing to different part of the instrument. (see Fig. 1.3) 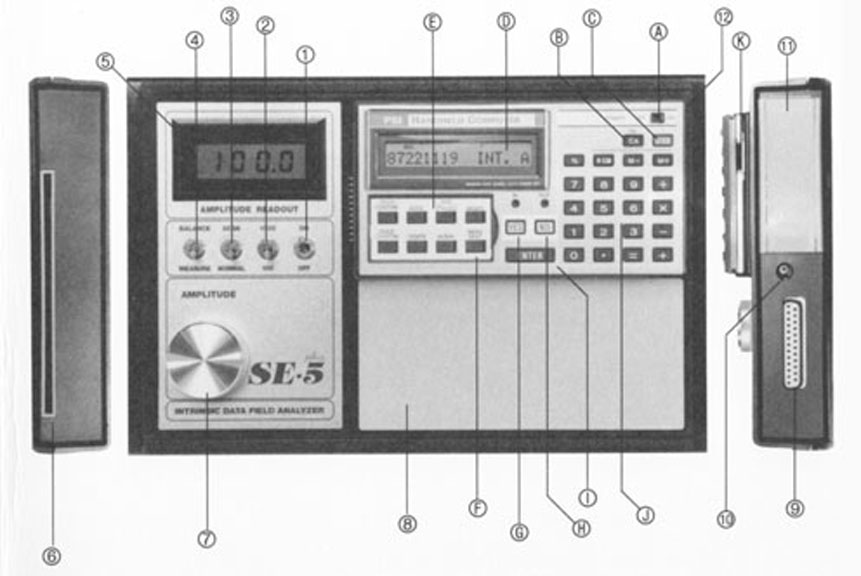 2. 100-1000 Switch. This changes the scale of the digital Amplitude Readout (#5) from 0 - 100.0 to 0 - 1000. This determines an actual percentage readout of whatever you are taking a measurement of. Simpler instruments from the past had different measuring modes and this switch accommodates those who are familiar with older instruments.

3. Normal - Scan switch. In the normal mode, you can take a measurement with the amplitude knob (#7) and see a readout on the Amplitude Readout. (#5) The Scan mode was originally designed for the scanning of new IDF Tunings. A Tuning is a number that represents something like an apple, for instance. We could call it an apple or we could scan for a numerical Tuning and it may turn out like this. “201-878.” To the SE-5 plus, this is the same as typing the word “apple” into the computer, but I am getting ahead of myself.

Another interesting application of the Scan mode is by using an attachment called the scanning probe. (Appendix C.) For example if you had many small vials of food substances and you wanted to check your subtle fields for IDF compatibility of these foods, you could use the probe to touch each little vial and feel for a change on the Detector Plate. (#8) This saves a lot of time.

It is also used when using an external computer and the software like that developed by Human Services Development Center. (For more about the software, see Appendix A.)

5. Amplitude Readout. This displays the numbers for the percentage readout when making a measurement.

6. Cell. The Cell is a small slot on the side of the instrument in which a photograph or small physical sample of the animal, person or object is placed. For example one can clip a small piece of hair and place it into an envelope and slip it into the Cell.

8. Detector Plate. This is sometimes referred to as the ‘rub’ or ‘stick’ plate because one rubs the fingers over the plate while turning the Amplitude Knob and waits for a change in the sensation on the plate. To me it feels like, at first, stroking velvet. Then it changes to a sticky table top that someone had spilled pop on and then it dried. The change happens when the Amplitude reaches the resonance peak of the measurement.

9. 25-pin connector. This has several purposes. Sometimes it is used to plug in the Output cable. The Output cable can be used for many different applications. For example I know of one person that used it to ‘charge-up’ his gasoline in his car and more than doubled his gas mileage. Another use of this connector is to hookup a larger computer (like a laptop or palmtop) so that you can have all of the convenience and power of a personal computer. (see Turbo Method, Appendix A.)

10. AC adapter jack. This is so you can run the SE-5 plus on normal 120V house current. This saves the batteries when you have the opportunity to plug it in.

11. Battery Compartment. This is where the 9V battery is kept. To change the battery, simply open this compartment and unsnap the battery from the battery clip and snap on a new one.

12. Built in computer. This is where different programs are stored. For example, the Agriculture Program, General Analysis program, Chakra program, etc. can be activated, depending on what software you use. This is also your main control center to type in whatever you would like to analyze or balance.

He said, “The letters A-K (Fig. 1.3) are references to the onboard computer.”

A. is the On/Off switch for the computer.

B. is the [CA] Clear All button that works like the clear button on a calculator. It clears the computer screen of whatever is showing at the time.

C. is the [CE] Clear Entry key. This is used if you make a mistake in typing and will clear the screen but keep you in the same program.

D. is the computer window that displays words and numbers.

F. is the Menu Key (One of the Function Keys.) Used to call up the main menu.

G. YES key. This is used to select items from the main menu.

H. No key. Used for going backward in the menu items and other functions as well.

I. is the [ENTER] button that is used to move from one Tuning to another in a program. For example, when you first begin the Subtle Balance program, a Tuning appears on the screen, 9062755 Align Chakras. By pushing [Enter], it advances the program one step to 9424459 Aural Balance. By pushing [Enter] again, it moves to the next Tuning, 6975766 Auto toxicity, etc. There are 40 Tunings in this program. (Note: Not all SE-5s come with the same programs in the computer. I refer to the one that I use the most, the B-4 program.)

J. is the number keypad.